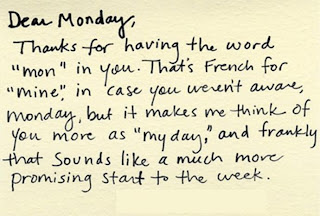 On Wikipedia...
"A number of songs feature Monday, often as a day of depression, anxiety, or melancholy. For example, Monday, Monday (1966) from the Mamas & the Papas, Rainy Days and Mondays (1971) from the Carpenters, I Don't Like Mondays (1979) from the Boomtown Rats, and Manic Monday (1986) from the Bangles."

Yes it's the first day of the week when adults go back to work and children go back to school after the weekend.

But check this out...
It's really Moon Day!
"The name of Monday is derived from Old English Mōnandæg and Middle English Monenday, which means "moon day". "

Poor, poor Monday... it gets such a bad rap.
It is however, excitingly the first day of the week!

Kids get to go back in to school and see their friends!
Yes some people go back in to work... but Monday's get everyone's adrenaline going.
People say hello! How was your weekend?
There's chatter and discussion about what everyone did.
It's uniting if you really think about it.

Here's some other amusing good things I found out about monday...

A few from Odee...
Monday is the best day to buy a car - car salesmen have few Monday buyers and are more willing to cut a deal :)

Monday is the least rainy day of the week! - Some people believe it's due to man made pollution subsiding over the weekend!

Workers only manage about 3.5 hours of productive work on a Monday.
So why complain???! :) You're going to do less on a Monday! YAY!
It tales a bit to get back in gear.

So hey!
Kick Monday's butt and enjoy the day!
Hope we gave you a few reasons to help you through it or at least smile!